Confessions of an English Opium-Eater 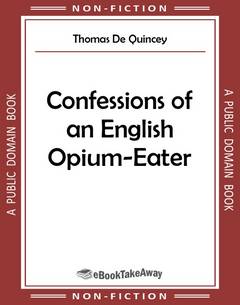 From the “London Magazine” for September 1821.

I here present you, courteous reader, with the record of a remarkable period in my life: according to my application of it, I trust that it will prove not merely an interesting record, but in a considerable degree useful and instructive.  In that hope it is that I have drawn it up; and that must be my apology for breaking through that delicate and honourable reserve which, for the most part, restrains us from the public exposure of our own errors and infirmities.  Nothing, indeed, is more revolting to English feelings than the spectacle of a human being obtruding on our notice his moral ulcers or scars, and tearing away that “decent drapery” which time or indulgence to human frailty may have drawn over them; accordingly, the greater part of our confessions (that is, spontaneous and extra-judicial confessions) proceed from demireps, adventurers, or swindlers: and for any such acts of gratuitous self-humiliation from those who can be supposed in sympathy with the decent and self-respecting part of society, we must look to French literature, or to that part of the German which is tainted with the spurious and defective sensibility of the French.  All this I feel so forcibly, and so nervously am I alive to reproach of this tendency, that I have for many months hesitated about the propriety of allowing this or any part of my narrative to come before the public eye until after my death (when, for many reasons, the whole will be published); and it is not without an anxious review of the reasons for and against this step that I have at last concluded on taking it.

Guilt and misery shrink, by a natural instinct, from public notice: they court privacy and solitude: and even in their choice of a grave will sometimes sequester themselves from the general population of the churchyard, as if declining to claim fellowship with the great family of man, and wishing (in the affecting language of Mr. Wordsworth)

Humbly to express
A penitential loneliness.

It is well, upon the whole, and for the interest of us all, that it should be so: nor would I willingly in my own person manifest a disregard of such salutary feelings, nor in act or word do anything to weaken them; but, on the one hand, as my self-accusation does not amount to a confession of guilt, so, on the other, it is possible that, if it did, the benefit resulting to others from the record of an experience purchased at so heavy a price might compensate, by a vast overbalance, for any violence done to the feelings I have noticed, and justify a breach of the general rule.  Infirmity and misery do not of necessity imply guilt.  They approach or recede from shades of that dark alliance, in proportion to the probable motives and prospects of the offender, and the palliations, known or secret, of the offence; in proportion as the temptations to it were potent from the first, and the resistance to it, in act or in effort, was earnest to the last.  For my own part, without breach of truth or modesty, I may affirm that my life has been, on the whole, the life of a philosopher: from my birth I was made an intellectual creature, and intellectual in the highest sense my pursuits and pleasures have been, even from my schoolboy days.  If opium-eating be a sensual pleasure, and if I am bound to confess that I have indulged in it to an excess not yet recorded of any other man, it is no less true that I have struggled against this fascinating enthralment with a religious zeal, and have at length accomplished what I never yet heard attributed to any other man—have untwisted, almost to its final links, the accursed chain which fettered me.  Such a self-conquest may reasonably be set off in counterbalance to any kind or degree of self-indulgence.  Not to insist that in my case the self-conquest was unquestionable, the self-indulgence open to doubts of casuistry, according as that name shall be extended to acts aiming at the bare relief of pain, or shall be restricted to such as aim at the excitement of positive pleasure.

Guilt, therefore, I do not acknowledge; and if I did, it is possible that I might still resolve on the present act of confession in consideration of the service which I may thereby render to the whole class of opium-eaters.  But who are they?  Reader, I am sorry to say a very numerous class indeed.  Of this I became convinced some years ago by computing at that time the number of those in one small class of English society (the class of men distinguished for talents, or of eminent station) who were known to me, directly or indirectly, as opium-eaters; such, for instance, as the eloquent and benevolent ---, the late Dean of ---, Lord ---, Mr. --- the philosopher, a late Under-Secretary of State (who described to me the sensation which first drove him to the use of opium in the very same words as the Dean of ---, viz., “that he felt as though rats were gnawing and abrading the coats of his stomach”), Mr. ---, and many others hardly less known, whom it would be tedious to mention.  Now, if one class, comparatively so limited, could furnish so many scores of cases (and that within the knowledge of one single inquirer), it was a natural inference that the entire population of England would furnish a proportionable number.  The soundness of this inference, however, I doubted, until some facts became known to me which satisfied me that it was not incorrect.  I will mention two.  (1) Three respectable London druggists, in widely remote quarters of London, from whom I happened lately to be purchasing small quantities of opium, assured me that the number of amateur opium-eaters (as I may term them) was at this time immense; and that the difficulty of distinguishing those persons to whom habit had rendered opium necessary from such as were purchasing it with a view to suicide, occasioned them daily trouble and disputes.  This evidence respected London only.  But (2)—which will possibly surprise the reader more—some years ago, on passing through Manchester, I was informed by several cotton manufacturers that their workpeople were rapidly getting into the practice of opium-eating; so much so, that on a Saturday afternoon the counters of the druggists were strewed with pills of one, two, or three grains, in preparation for the known demand of the evening.  The immediate occasion of this practice was the lowness of wages, which at that time would not allow them to indulge in ale or spirits, and wages rising, it may be thought that this practice would cease; but as I do not readily believe that any man having once tasted the divine luxuries of opium will afterwards descend to the gross and mortal enjoyments of alcohol, I take it for granted

That those eat now who never ate before;
And those who always ate, now eat the more.