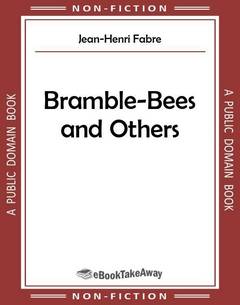 Download Bramble-Bees and Others by Jean-Henri Fabre for iPhone, iPad, Nook, Android, and Kindle in PDF and all popular eBook reader formats (AZW3, EPUB, MOBI).

The peasant, as he trims his hedge, whose riotous tangle threatens to encroach upon the road, cuts the trailing stems of the bramble a foot or two from the ground and leaves the root-stock, which soon dries up. These bramble-stumps, sheltered and protected by the thorny brushwood, are in great demand among a host of Hymenoptera who have families to settle. The stump, when dry, offers to any one that knows how to use it a hygienic dwelling, where there is no fear of damp from the sap; its soft and abundant pith lends itself to easy work; and the top offers a weak spot which makes it possible for the insect to reach the vein of least resistance at once, without cutting away through the hard ligneous wall. To many, therefore, of the Bee and Wasp tribe, whether honey-gatherers or hunters, one of these dry stalks is a valuable discovery when its diameter matches the size of its would-be inhabitants; and it is also an interesting subject of study to the entomologist who, in the winter, pruning-shears in hand, can gather in the hedgerows a faggot rich in small industrial wonders. Visiting the bramble-bushes has long been one of my favourite pastimes during the enforced leisure of the wintertime; and it is seldom but some new discovery, some unexpected fact, makes up to me for my torn fingers.

My list, which is still far from being complete, already numbers nearly thirty species of bramble-dwellers in the neighbourhood of my house; other observers, more assiduous than I, exploring another region and one covering a wider range, have counted as many as fifty. I give at foot an inventory of the species which I have noted.

Most of these insects have been submitted to a learned expert, Professor Jean Perez, of Bordeaux. I take this opportunity of renewing my thanks for his kindness in identifying them for me.—Author's Note.)

They include members of very diverse corporations. Some, more industrious and equipped with better tools, remove the pith from the dry stem and thus obtain a vertical cylindrical gallery, the length of which may be nearly a cubit. This sheath is next divided, by partitions, into more or less numerous storeys, each of which forms the cell of a larva. Others, less well-endowed with strength and implements, avail themselves of the old galleries of other insects, galleries that have been abandoned after serving as a home for their builder's family. Their only work is to make some slight repairs in the ruined tenement, to clear the channel of its lumber, such as the remains of cocoons and the litter of shattered ceilings, and lastly to build new partitions, either with a plaster made of clay or with a concrete formed of pith-scrapings cemented with a drop of saliva.

You can tell these borrowed dwellings by the unequal size of the storeys. When the worker has herself bored the channel, she economizes her space: she knows how costly it is. The cells, in that case, are all alike, the proper size for the tenant, neither too large nor too small. In this box, which has cost weeks of labour, the insect has to house the largest possible number of larvae, while allotting the necessary amount of room to each. Method in the superposition of the floors and economy of space are here the absolute rule.

But there is evidence of waste when the insect makes use of a bramble hollowed by another. This is the case with Tripoxylon figulus. To obtain the store-rooms wherein to deposit her scanty stock of Spiders, she divides her borrowed cylinder into very unequal cells, by means of slender clay partitions. Some are a centimetre (.39 inch.—Translator's Note.) deep, the proper size for the insect; others are as much as two inches. These spacious rooms, out of all proportion to the occupier, reveal the reckless extravagance of a casual proprietress whose title-deeds have cost her nothing.

But, whether they be the original builders or labourers touching up the work of others, they all alike have their parasites, who constitute the third class of bramble-dwellers. These have neither galleries to excavate nor victuals to provide; they lay their egg in a strange cell; and their grub feeds either on the provisions of the lawful owner's larva or on that larva itself.