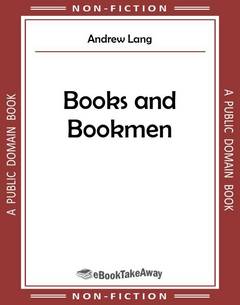 Download Books and Bookmen by for iPhone, iPad, Nook, Android, and Kindle in PDF and all popular eBook reader formats (AZW3, EPUB, MOBI).

The Countryman.  “You know how much, for some time past, the editions of the Elzevirs have been in demand.  The fancy for them has even penetrated into the country.  I am acquainted with a man there who denies himself necessaries, for the sake of collecting into a library (where other books are scarce enough) as many little Elzevirs as he can lay his hands upon.  He is dying of hunger, and his consolation is to be able to say, ‘I have all the poets whom the Elzevirs printed.  I have ten examples of each of them, all with red letters, and all of the right date.’  This, no doubt, is a craze, for, good as the books are, if he kept them to read them, one example of each would be enough.”

The Parisian.  “If he had wanted to read them, I would not have advised him to buy Elzevirs.  The editions of minor authors which these booksellers published, even editions ‘of the right date,’ as you say, are not too correct.  Nothing is good in the books but the type and the paper.  Your friend would have done better to use the editions of Gryphius or Estienne.”

This fragment of a literary dialogue I translate from ‘Entretiens sur les Contes de Fées,’ a book which contains more of old talk about books and booksellers than about fairies and folk-lore.  The ‘Entretiens’ were published in 1699, about sixteen years after the Elzevirs ceased to be publishers.  The fragment is valuable: first, because it shows us how early the taste for collecting Elzevirs was fully developed, and, secondly, because it contains very sound criticism of the mania.  Already, in the seventeenth century, lovers of the tiny Elzevirian books waxed pathetic over dates, already they knew that a ‘Cæsar’ of 1635 was the right ‘Cæsar,’ already they were fond of the red-lettered passages, as in the first edition of the ‘Virgil’ of 1636.  As early as 1699, too, the Parisian critic knew that the editions were not very correct, and that the paper, type, ornaments, and format were their main attractions.  To these we must now add the rarity of really good Elzevirs.

Though Elzevirs have been more fashionable than at present, they are still regarded by novelists as the great prize of the book collector.  You read in novels about “priceless little Elzevirs,” about books “as rare as an old Elzevir.”  I have met, in the works of a lady novelist (but not elsewhere), with an Elzevir ‘Theocritus.’  The late Mr. Hepworth Dixon introduced into one of his romances a romantic Elzevir Greek Testament, “worth its weight in gold.”  Casual remarks of this kind encourage a popular delusion that all Elzevirs are pearls of considerable price.  When a man is first smitten with the pleasant fever of book-collecting, it is for Elzevirs that he searches.  At first he thinks himself in amazing luck.  In Booksellers’ Row and in Castle Street he “picks up,” for a shilling or two, Elzevirs, real or supposed.  To the beginner, any book with a sphere on the title-page is an Elzevir.  For the beginner’s instruction, two copies of spheres are printed here.  The second is a sphere, an ill-cut, ill-drawn sphere, which is not Elzevirian at all.  The mark was used in the seventeenth century by many other booksellers and printers.  The first, on the other hand, is a true Elzevirian sphere, from a play of Molière’s, printed in 1675.  Observe the comparatively neat drawing of the first sphere, and be not led away after spurious imitations.

Beware, too, of the vulgar error of fancying that little duodecimos with the mark of the fox and the bee’s nest, and the motto “Quaerendo,” come from the press of the Elzevirs.  The mark is that of Abraham Wolfgang, which name is not a pseudonym for Elzevir.  There are three sorts of Elzevir pseudonyms.  First, they occasionally reprinted the full title-page, publisher’s name and all, of the book they pirated.  Secondly, when they printed books of a “dangerous” sort, Jansenist pamphlets and so forth, they used pseudonyms like “Nic. Schouter,” on the ‘Lettres Provinciales’ of Pascal.  Thirdly, there are real pseudonyms employed by the Elzevirs.  John and Daniel, printing at Leyden (1652–1655), used the false name “Jean Sambix.”  The Elzevirs of Amsterdam often placed the name “Jacques le Jeune” on their title-pages.  The collector who remembers these things must also see that his purchases have the right ornaments at the heads of chapters, the right tail-pieces at the ends.  Two of the most frequently recurring ornaments are the so-called “Tête de Buffle” and the “Sirène.”  More or less clumsy copies of these and the other Elzevirian ornaments are common enough in books of the period, even among those printed out of the Low Countries; for example, in books published in Paris.

A brief sketch of the history of the Elzevirs may here be useful.  The founder of the family, a Flemish bookbinder, Louis, left Louvain and settled in Leyden in 1580.  He bought a house opposite the University, and opened a book-shop.  Another shop, on college ground, was opened in 1587.  Louis was a good bookseller, a very ordinary publisher.  It was not till shortly before his death, in 1617, that his grandson Isaac bought a set of types and other material.  Louis left six sons.  Two of these, Matthew and Bonaventure, kept on the business, dating ex officina Elzeviriana.  In 1625 Bonaventure and Abraham (son of Matthew) became partners.  The “good dates” of Elzevirian books begin from 1626.  The two Elzevirs chose excellent types, and after nine years’ endeavours turned out the beautiful ‘Cæsar’ of 1635.

Their classical series in petit format was opened with ‘Horace’ and ‘Ovid’ in 1629.  In 1641 they began their elegant piracies of French plays and poetry with ‘Le Cid.’  It was worth while being pirated by the Elzevirs, who turned you out like a gentleman, with fleurons and red letters, and a pretty frontispiece.  The modern pirate dresses you in rags, prints you murderously, and binds you, if he binds you at all, in some hideous example of “cloth extra,” all gilt, like archaic gingerbread.  Bonaventure and Abraham both died in 1652.  They did not depart before publishing (1628), in grand format, a desirable work on fencing, Thibault’s ‘Académie de l’Espée.’  This Tibbald also killed by the book.  John and Daniel Elzevir came next.  They brought out the ‘Imitation’ (Thomæ a Kempis canonici regularis ord.  S. Augustini De Imitatione Christi, libri iv.); I wish by taking thought I could add eight millimetres to the stature of my copy.  In 1655 Daniel joined a cousin, Louis, in Amsterdam, and John stayed in Leyden.  John died in 1661; his widow struggled on, but her son Abraham (1681) let all fall into ruins.  Abraham died 1712.  The Elzevirs of Amsterdam lasted till 1680, when Daniel died, and the business was wound up.  The type, by Christopher Van Dyck, was sold in 1681, by Daniel’s widow.  Sic transit gloria.