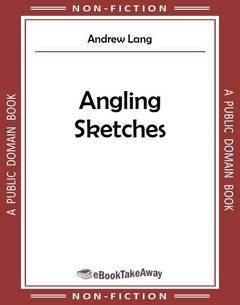 THE CONFESSIONS OF A DUFFER

These papers do not boast of great sport.  They are truthful, not like the tales some fishers tell.  They should appeal to many sympathies.  There is no false modesty in the confidence with which I esteem myself a duffer, at fishing.  Some men are born duffers; others, unlike persons of genius, become so by an infinite capacity for not taking pains.  Others, again, among whom I would rank myself, combine both these elements of incompetence.  Nature, that made me enthusiastically fond of fishing, gave me thumbs for fingers, short-sighted eyes, indolence, carelessness, and a temper which (usually sweet and angelic) is goaded to madness by the laws of matter and of gravitation.  For example: when another man is caught up in a branch he disengages his fly; I jerk at it till something breaks.  As for carelessness, in boyhood I fished, by preference, with doubtful gut and knots ill-tied; it made the risk greater, and increased the excitement if one did hook a trout.  I can’t keep a fly-book.  I stuff the flies into my pockets at random, or stick them into the leaves of a novel, or bestow them in the lining of my hat or the case of my rods.  Never, till 1890, in all my days did I possess a landing-net.  If I can drag a fish up a bank, or over the gravel, well; if not, he goes on his way rejoicing.  On the Test I thought it seemly to carry a landing-net.  It had a hinge, and doubled up.  I put the handle through a button-hole of my coat: I saw a big fish rising, I put a dry fly over him; the idiot took it.  Up stream he ran, then down stream, then he yielded to the rod and came near me.  I tried to unship my landing-net from my button-hole.  Vain labour!  I twisted and turned the handle, it would not budge.  Finally, I stooped, and attempted to ladle the trout out with the short net; but he broke the gut, and went off.  A landing-net is a tedious thing to carry, so is a creel, and a creel is, to me, a superfluity.  There is never anything to put in it.  If I do catch a trout, I lay him under a big stone, cover him with leaves, and never find him again.  I often break my top joint; so, as I never carry string, I splice it with a bit of the line, which I bite off, for I really cannot be troubled with scissors and I always lose my knife.  When a phantom minnow sticks in my clothes, I snap the gut off, and put on another, so that when I reach home I look as if a shoal of fierce minnows had attacked me and hung on like leeches.  When a boy, I was—once or twice—a bait-fisher, but I never carried worms in box or bag.  I found them under big stones, or in the fields, wherever I had the luck.  I never tie nor otherwise fasten the joints of my rod; they often slip out of the sockets and splash into the water.  Mr. Hardy, however, has invented a joint-fastening which never slips.  On the other hand, by letting the joint rust, you may find it difficult to take down your rod.  When I see a trout rising, I always cast so as to get hung up, and I frighten him as I disengage my hook.  I invariably fall in and get half-drowned when I wade, there being an insufficiency of nails in the soles of my brogues.  My waders let in water, too, and when I go out to fish I usually leave either my reel, or my flies, or my rod, at home.  Perhaps no other man’s average of lost flies in proportion to taken trout was ever so great as mine.  I lose plenty, by striking furiously, after a series of short rises, and breaking the gut, with which the fish swims away.  As to dressing a fly, one would sooner think of dressing a dinner.  The result of the fly-dressing would resemble a small blacking-brush, perhaps, but nothing entomological.

Then why, a persevering reader may ask, do I fish?  Well, it is stronger than myself, the love of fishing; perhaps it is an inherited instinct, without the inherited power.  I may have had a fishing ancestor who bequeathed to me the passion without the art.  My vocation is fixed, and I have fished to little purpose all my days.  Not for salmon, an almost fabulous and yet a stupid fish, which must be moved with a rod like a weaver’s beam.  The trout is more delicate and dainty—not the sea-trout, which any man, woman, or child can capture, but the yellow trout in clear water.