An Englishman Looks at the World 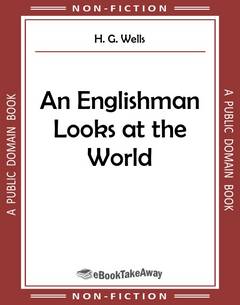 A collection of essays including a personal account of his flight in an airplane, the coronation of King George V in 1912, Socialism, and the state of London traffic.

THE COMING OF BLÉRIOT

The telephone bell rings with the petulant persistence that marks a trunk call, and I go in from some ineffectual gymnastics on the lawn to deal with the irruption. There is the usual trouble in connecting up, minute voices in Folkestone and Dover and London call to one another and are submerged by buzzings and throbbings. Then in elfin tones the real message comes through: "Blériot has crossed the Channel…. An article … about what it means."

I make a hasty promise and go out and tell my friends.

From my garden I look straight upon the Channel, and there are white caps upon the water, and the iris and tamarisk are all asway with the south-west wind that was also blowing yesterday. M. Blériot has done very well, and Mr. Latham, his rival, had jolly bad luck. That is what it means to us first of all. It also, I reflect privately, means that I have under-estimated the possible stability of aeroplanes. I did not expect anything of the sort so soon. This is a good five years before my reckoning of the year before last.

We all, I think, regret that being so near we were not among the fortunate ones who saw that little flat shape skim landward out of the blue; surely they have an enviable memory; and then we fell talking and disputing about what that swift arrival may signify. It starts a swarm of questions.

First one remarks that here is a thing done, and done with an astonishing effect of ease, that was incredible not simply to ignorant people but to men well informed in these matters. It cannot be fifteen years ago since Sir Hiram Maxim made the first machine that could lift its weight from the ground, and I well remember how the clumsy quality of that success confirmed the universal doubt that men could ever in any effectual manner fly.

Since then a conspiracy of accidents has changed the whole problem; the bicycle and its vibrations developed the pneumatic tyre, the pneumatic tyre rendered a comfortable mechanically driven road vehicle possible, the motor-car set an enormous premium on the development of very light, very efficient engines, and at last the engineer was able to offer the experimentalists in gliding one strong enough and light enough for the new purpose. And here we are! Or, rather, M. Blériot is!

What does it mean for us?

One meaning, I think, stands out plainly enough, unpalatable enough to our national pride. This thing from first to last was made abroad. Of all that made it possible we can only claim so much as is due to the improvement of the bicycle. Gliding began abroad while our young men of muscle and courage were braving the dangers of the cricket field. The motor-car and its engine was being worked out "over there," while in this country the mechanically propelled road vehicle, lest it should frighten the carriage horses of the gentry, was going meticulously at four miles an hour behind a man with a red flag. Over there, where the prosperous classes have some regard for education and some freedom of imaginative play, where people discuss all sorts of things fearlessly, and have a respect for science, this has been achieved.

And now our insularity is breached by the foreigner who has got ahead with flying.

It means, I take it, first and foremost for us, that the world cannot wait for the English.