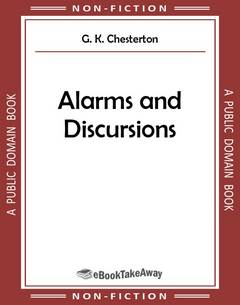 Alone at some distance from the wasting walls of a disused abbey I found half sunken in the grass the grey and goggle-eyed visage of one of those graven monsters that made the ornamental water-spouts in the cathedrals of the Middle Ages. It lay there, scoured by ancient rains or striped by recent fungus, but still looking like the head of some huge dragon slain by a primeval hero. And as I looked at it, I thought of the meaning of the grotesque, and passed into some symbolic reverie of the three great stages of art.

Once upon a time there lived upon an island a merry and innocent people, mostly shepherds and tillers of the earth. They were republicans, like all primitive and simple souls; they talked over their affairs under a tree, and the nearest approach they had to a personal ruler was a sort of priest or white witch who said their prayers for them. They worshipped the sun, not idolatrously, but as the golden crown of the god whom all such infants see almost as plainly as the sun.

Now this priest was told by his people to build a great tower, pointing to the sky in salutation of the Sun-god; and he pondered long and heavily before he picked his materials. For he was resolved to use nothing that was not almost as clear and exquisite as sunshine itself; he would use nothing that was not washed as white as the rain can wash the heavens, nothing that did not sparkle as spotlessly as that crown of God. He would have nothing grotesque or obscure; he would not have even anything emphatic or even anything mysterious. He would have all the arches as light as laughter and as candid as logic. He built the temple in three concentric courts, which were cooler and more exquisite in substance each than the other. For the outer wall was a hedge of white lilies, ranked so thick that a green stalk was hardly to be seen; and the wall within that was of crystal, which smashed the sun into a million stars. And the wall within that, which was the tower itself, was a tower of pure water, forced up in an everlasting fountain; and upon the very tip and crest of that foaming spire was one big and blazing diamond, which the water tossed up eternally and caught again as a child catches a ball.

"Now," said the priest, "I have made a tower which is a little worthy of the sun."

But about this time the island was caught in a swarm of pirates; and the shepherds had to turn themselves into rude warriors and seamen; and at first they were utterly broken down in blood and shame; and the pirates might have taken the jewel flung up for ever from their sacred fount. And then, after years of horror and humiliation, they gained a little and began to conquer because they did not mind defeat. And the pride of the pirates went sick within them after a few unexpected foils; and at last the invasion rolled back into the empty seas and the island was delivered. And for some reason after this men began to talk quite differently about the temple and the sun. Some, indeed, said, "You must not touch the temple; it is classical; it is perfect, since it admits no imperfections." But the others answered, "In that it differs from the sun, that shines on the evil and the good and on mud and monsters everywhere. The temple is of the noon; it is made of white marble clouds and sapphire sky. But the sun is not always of the noon. The sun dies daily, every night he is crucified in blood and fire." Now the priest had taught and fought through all the war, and his hair had grown white, but his eyes had grown young. And he said, "I was wrong and they are right. The sun, the symbol of our father, gives life to all those earthly things that are full of ugliness and energy. All the exaggerations are right, if they exaggerate the right thing. Let us point to heaven with tusks and horns and fins and trunks and tails so long as they all point to heaven. The ugly animals praise God as much as the beautiful. The frog's eyes stand out of his head because he is staring at heaven. The giraffe's neck is long because he is stretching towards heaven. The donkey has ears to hear—let him hear."

And under the new inspiration they planned a gorgeous cathedral in the Gothic manner, with all the animals of the earth crawling over it, and all the possible ugly things making up one common beauty, because they all appealed to the god. The columns of the temple were carved like the necks of giraffes; the dome was like an ugly tortoise; and the highest pinnacle was a monkey standing on his head with his tail pointing at the sun. And yet the whole was beautiful, because it was lifted up in one living and religious gesture as a man lifts his hands in prayer.