A New Conscience and an Ancient Evil 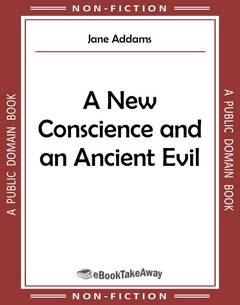 Download A New Conscience and an Ancient Evil by Jane Addams for iPhone, iPad, Nook, Android, and Kindle in PDF and all popular eBook reader formats (AZW3, EPUB, MOBI).

In every large city throughout the world thousands of women are so set aside as outcasts from decent society that it is considered an impropriety to speak the very word which designates them. Lecky calls this type of woman “the most mournful and the most awful figure in history”: he says that “she remains, while creeds and civilizations rise and fall, the eternal sacrifice of humanity, blasted for the sins of the people.” But evils so old that they are imbedded in man’s earliest history have been known to sway before an enlightened public opinion and in the end to give way to a growing conscience, which regards them first as a moral affront and at length as an utter impossibility. Thus the generation just before us, our own fathers, uprooted the enormous upas of slavery, “the tree that was literally as old as the race of man,” although slavery doubtless had its beginnings in the captives of man’s earliest warfare, even as this existing evil thus originated.

Those of us who think we discern the beginnings of a new conscience in regard to this twin of slavery, as old and outrageous as slavery itself and even more persistent, find a possible analogy between certain civic, philanthropic and educational efforts directed against the very existence of this social evil and similar organized efforts which preceded the overthrow of slavery in America. Thus, long before slavery was finally declared illegal, there were international regulations of its traffic, state and federal legislation concerning its extension, and many extra legal attempts to control its abuses; quite as we have the international regulations concerning the white slave traffic, the state and interstate legislation for its repression, and an extra legal power in connection with it so universally given to the municipal police that the possession of this power has become one of the great sources of corruption in every American city.

Before society was ready to proceed against the institution of slavery as such, groups of men and women by means of the underground railroad cherished and educated individual slaves; it is scarcely necessary to point out the similarity to the rescue homes and preventive associations which every great city contains.

It is always easy to overwork an analogy, and yet the economist who for years insisted that slave labor continually and arbitrarily limited the wages of free labor and was therefore a detriment to national wealth was a forerunner of the economist of to-day who points out the economic basis of the social evil, the connection between low wages and despair, between over-fatigue and the demand for reckless pleasure.

Before the American nation agreed to regard slavery as unjustifiable from the standpoint of public morality, an army of reformers, lecturers, and writers set forth its enormity in a never-ceasing flow of invective, of appeal, and of portrayal concerning the human cruelty to which the system lent itself. We can discern the scouts and outposts of a similar army advancing against this existing evil: the physicians and sanitarians who are committed to the task of ridding the race from contagious diseases, the teachers and lecturers who are appealing to the higher morality of thousands of young people; the growing literature, not only biological and didactic, but of a popular type more closely approaching “Uncle Tom’s Cabin.”

Throughout the agitation for the abolition of slavery in America, there were statesmen who gradually became convinced of the political and moral necessity of giving to the freedman the protection of the ballot. In this current agitation there are at least a few men and women who would extend a greater social and political freedom to all women if only because domestic control has proved so ineffectual.

We may certainly take courage from the fact that our contemporaries are fired by social compassions and enthusiasms, to which even our immediate predecessors were indifferent. Such compunctions have ever manifested themselves in varying degrees of ardor through different groups in the same community. Thus among those who are newly aroused to action in regard to the social evil are many who would endeavor to regulate it and believe they can minimize its dangers, still larger numbers who would eliminate all trafficking of unwilling victims in connection with it, and yet others who believe that as a quasi-legal institution it may be absolutely abolished. Perhaps the analogy to the abolition of slavery is most striking in that these groups, in their varying points of view, are like those earlier associations which differed widely in regard to chattel slavery. Only the so-called extremists, in the first instance, stood for abolition and they were continually told that what they proposed was clearly impossible. The legal and commercial obstacles, bulked large, were placed before them and it was confidently asserted that the blame for the historic existence of slavery lay deep within human nature itself. Yet gradually all of these associations reached the point of view of the abolitionist and before the war was over even the most lukewarm unionist saw no other solution of the nation’s difficulty. Some such gradual conversion to the point of view of abolition is the experience of every society or group of people who seriously face the difficulties and complications of the social evil. Certainly all the national organizations—the National Vigilance Committee, the American Purity Federation, the Alliance for the Suppression and Prevention of the White Slave Traffic and many others—stand for the final abolition of commercialized vice. Local vice commissions, such as the able one recently appointed in Chicago, although composed of members of varying beliefs in regard to the possibility of control and regulation, united in the end in recommending a law enforcement looking towards final abolition. Even the most sceptical of Chicago citizens, after reading the fearless document, shared the hope of the commission that “the city, when aroused to the truth, would instantly rebel against the social evil in all its phases.” A similar recommendation of ultimate abolition was recently made unanimous by the Minneapolis vice commission after the conversion of many of its members. Doubtless all of the national societies have before them a task only less gigantic than that faced by those earlier associations in America for the suppression of slavery, although it may be legitimate to remind them that the best-known anti-slavery society in America was organized by the New England abolitionists in 1836, and only thirty-six years later, in 1872, was formally disbanded because its object had been accomplished. The long struggle ahead of these newer associations will doubtless claim its martyrs and its heroes, has indeed already claimed them during the last thirty years. Few righteous causes have escaped baptism with blood; nevertheless, to paraphrase Lincoln’s speech, if blood were exacted drop by drop in measure to the tears of anguished mothers and enslaved girls, the nation would still be obliged to go into the struggle.