A Man of Means 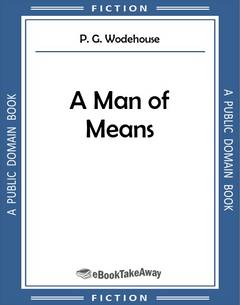 Download A Man of Means by P.G. Wodehouse for iPhone, iPad, Nook, Android, and Kindle in PDF and all popular eBook reader formats (AZW3, EPUB, MOBI).

A Man of Means is a collection of six short stories featuring Roland Bleke, a young man for whom success comes far too easily and for whom financial success is a mixed blessing.

THE EPISODE OF THE LANDLADY'S DAUGHTER

First of a Series of Six Stories [First published in Pictorial Review, May 1916]

When a seed-merchant of cautious disposition and an eye to the main chance receives from an eminent firm of jam-manufacturers an extremely large order for clover-seed, his emotions are mixed. Joy may be said to predominate, but with the joy comes also uncertainty. Are these people, he asks himself, proposing to set up as farmers of a large scale, or do they merely want the seed to give verisimilitude to their otherwise bald and unconvincing raspberry jam? On the solution of this problem depends the important matter of price, for, obviously, you can charge a fraudulent jam disseminator in a manner which an honest farmer would resent.

This was the problem which was furrowing the brow of Mr. Julian Fineberg, of Bury St. Edwards, one sunny morning when Roland Bleke knocked at his door; and such was its difficulty that only at the nineteenth knock did Mr. Fineberg raise his head.

"Come in—that dashed woodpecker out there!" he shouted, for it was his habit to express himself with a generous strength towards the junior members of his staff.

The young man who entered looked exactly like a second clerk in a provincial seed-merchant's office—which, strangely enough, he chanced to be. His chief characteristic was an intense ordinariness. He was a young man; and when you had said that of him you had said everything. There was nothing which you would have noticed about him, except the fact that there was nothing to notice. His age was twenty-two and his name was Roland Bleke.

Mr. Fineberg, at the word, drew himself together much as a British square at Waterloo must have drawn itself together at the sight of a squadron of cuirassiers.

"Well? Don't stand there like an idiot. What is it?"

Mr. Fineberg's brain reeled. It was improbable that the millennium could have arrived with a jerk; on the other hand, he had distinctly heard one of his clerks complain that his salary was too large. He pinched himself.

"If you could see your way to reduce it, sir——"

It occurred to Mr. Fineberg for one instant that his subordinate was endeavoring to be humorous, but a glance at Roland's face dispelled that idea.

"Why do you want it reduced?"

"What the deuce do you mean?"

Mr. Fineberg saw light. He was a married man himself.

"My boy," he said genially, "I quite understand. But I can do you better than that. It's no use doing this sort of thing in a small way. From now on your salary is a hundred and ten. No, no, don't thank me. You're an excellent clerk, and it's a pleasure to me to reward merit when I find it. Close the door after you."

And Mr. Fineberg returned with a lighter heart to the great clover-seed problem.

The circumstances which had led Roland to approach his employer may be briefly recounted. Since joining the staff of Mr. Fineberg, he had lodged at the house of a Mr. Coppin, in honorable employment as porter at the local railway-station. The Coppin family, excluding domestic pets, consisted of Mr. Coppin, a kindly and garrulous gentleman of sixty, Mrs. Coppin, a somewhat negative personality, most of whose life was devoted to cooking and washing up in her underground lair, Brothers Frank and Percy, gentleman of leisure, popularly supposed to be engaged in the mysterious occupation known as "lookin' about for somethin'," and, lastly, Muriel.

For some months after his arrival, Muriel had been to Roland Bleke a mere automaton, a something outside himself that was made only for neatly-laid breakfast tables and silent removal of plates at dinner. Gradually, however, when his natural shyness was soothed by use sufficiently to enable him to look at her when she came into the room, he discovered that she was a strikingly pretty girl, bounded to the North by a mass of auburn hair and to the South by small and shapely feet. She also possessed what, we are informed—we are children in these matters ourselves—is known as the R. S. V. P. eye. This eye had met Roland's one evening, as he chumped his chop, and before he knew what he was doing he had remarked that it had been a fine day.