A Journey in Other Worlds 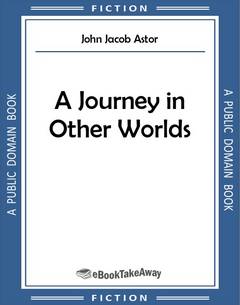 Download A Journey in Other Worlds by John Jacob Astor for iPhone, iPad, Nook, Android, and Kindle in PDF and all popular eBook reader formats (AZW3, EPUB, MOBI).

Jupiter--the magnificent planet with a diameter of 86,500 miles, having 119 times the surface and 1,300 times the volume of the earth--lay beneath them.

They had often seen it in the terrestrial sky, emitting its strong, steady ray, and had thought of that far-away planet, about which till recently so little had been known, and a burning desire had possessed them to go to it and explore its mysteries. Now, thanks to APERGY, the force whose existence the ancients suspected, but of which they knew so little, all things were possible.

Ayrault manipulated the silk-covered glass handles, and the Callisto moved on slowly in comparison with its recent speed, and all remained glued to their telescopes as they peered through the rushing clouds, now forming and now dissolving before their eyes. What transports of delight, what ecstatic bliss, was theirs! Men had discovered and mastered the secret of apergy, and now, "little lower than the angels," they could soar through space, leaving even planets and comets behind.

"Is it not strange," said Dr. Cortlandt, "that though it has been known for over a century that bodies charged with unlike electricities attract one another, and those charged with like repel, no one thought of utilizing the counterpart of gravitation? In the nineteenth century, savants and Indian jugglers performed experiments with their disciples and masses of inert matter, by causing them to remain without visible support at some distance from the ground; and while many of these, of course, were quacks, some were on the right track, though they did not push their research."

President Bearwarden and Ayrault assented. They were steering for an apparently hard part of the planet's surface, about a degree and a half north of its equator.

"Since Jupiter's axis is almost at right angles to the plane of its orbit," said the doctor, "being inclined only about one degree and a half, instead of twenty-three and a half, as was the earth's till nearly so recently, it will be possible for us to have any climate we wish, from constantly warm at the equator to constantly cool or cold as we approach the poles, without being troubled by extremes of winter and summer."

Until the Callisto entered the planet's atmosphere, its five moons appeared like silver shields against the black sky, but now things were looking more terrestrial, and they began to feel at home. Bearwarden put down his note-book, and Ayrault returned a photograph to his pocket, while all three gazed at their new abode. Beneath them was a vast continent variegated by chains of lakes and rivers stretching away in all directions except toward the equator, where lay a placid ocean as far as their telescopes could pierce. To the eastward were towering and massive mountains, and along the southern border of the continent smoking volcanoes, while toward the west they saw forests, gently rolling plains, and table-lands that would have satisfied a poet or set an agriculturist's heart at rest. "How I should like to mine those hills for copper, or drain the swamps to the south!" exclaimed Col. Bearwarden. "The Lake Superior mines and the reclamation of the Florida Everglades would be nothing to this."

"Any inhabitants we may find here have so much land at their disposal that they will not need to drain swamps on account of pressure of population for some time," put in the doctor.

"I hope we may find some four-legged inhabitants," said Ayrault, thinking of their explosive magazine rifles. "If Jupiter is passing through its Jurassic or Mesozoic period, there must be any amount of some kind of game." Just then a quiver shook the Callisto, and glancing to the right they noticed one of the volcanoes in violent eruption. Smoke filled the air in clouds, hot stones and then floods of lava poured from the crater, while even the walls of the hermetically sealed Callisto could not arrest the thunderous crashes that made the interior of the car resound.

"Had we not better move on?" said Bearwarden, and accordingly they went toward the woods they had first seen. Finding a firm strip of land between the forest and an arm of the sea, they gently grounded the Callisto, and not being altogether sure how the atmosphere of their new abode would suit terrestrial lungs, or what its pressure to the square inch might be, they cautiously opened a port-hole a crack, retaining their hold upon it with its screw. Instantly there was a rush and a whistling sound as of escaping steam, while in a few moments their barometer stood at thirty-six inches, whereupon they closed the opening.