A Damsel in Distress 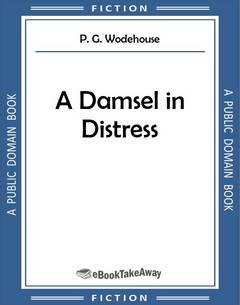 Golf-loving American composer George Bevan falls in love with a mysterious young lady who takes refuge in his taxicab one day.  When he tracks her down to Belpher Castle, home of Lord Marshmoreton things become severely muddled. Maud's aunt, Lady Caroline Byng, wants Maud to marry Reggie, her step-son. Maud, meanwhile, is known to be in love with an unknown American she met in Wales. So when George turns up speaking American, a nasty case of mistaken identity breaks out.

Inasmuch as the scene of this story is that historic pile, Belpher Castle, in the county of Hampshire, it would be an agreeable task to open it with a leisurely description of the place, followed by some notes on the history of the Earls of Marshmoreton, who have owned it since the fifteenth century. Unfortunately, in these days of rush and hurry, a novelist works at a disadvantage. He must leap into the middle of his tale with as little delay as he would employ in boarding a moving tramcar. He must get off the mark with the smooth swiftness of a jack-rabbit surprised while lunching. Otherwise, people throw him aside and go out to picture palaces.

I may briefly remark that the present Lord Marshmoreton is a widower of some forty-eight years: that he has two children-a son, Percy Wilbraham Marsh, Lord Belpher, who is on the brink of his twenty-first birthday, and a daughter, Lady Patricia Maud Marsh, who is just twenty: that the chatelaine of the castle is Lady Caroline Byng, Lord Marshmoreton's sister, who married the very wealthy colliery owner, Clifford Byng, a few years before his death (which unkind people say she hastened): and that she has a step-son, Reginald. Give me time to mention these few facts and I am done. On the glorious past of the Marshmoretons I will not even touch.

Luckily, the loss to literature is not irreparable. Lord Marshmoreton himself is engaged upon a history of the family, which will doubtless be on every bookshelf as soon as his lordship gets it finished. And, as for the castle and its surroundings, including the model dairy and the amber drawing-room, you may see them for yourself any Thursday, when Belpher is thrown open to the public on payment of a fee of one shilling a head. The money is collected by Keggs the butler, and goes to a worthy local charity. At least, that is the idea. But the voice of calumny is never silent, and there exists a school of thought, headed by Albert, the page-boy, which holds that Keggs sticks to these shillings like glue, and adds them to his already considerable savings in the Farmers' and Merchants' Bank, on the left side of the High Street in Belpher village, next door to the Oddfellows' Hall.

With regard to this, one can only say that Keggs looks far too much like a particularly saintly bishop to indulge in any such practices. On the other hand, Albert knows Keggs. We must leave the matter open.

Of course, appearances are deceptive. Anyone, for instance, who had been standing outside the front entrance of the castle at eleven o'clock on a certain June morning might easily have made a mistake. Such a person would probably have jumped to the conclusion that the middle-aged lady of a determined cast of countenance who was standing near the rose-garden, talking to the gardener and watching the young couple strolling on the terrace below, was the mother of the pretty girl, and that she was smiling because the latter had recently become engaged to the tall, pleasant-faced youth at her side.

Sherlock Holmes himself might have been misled. One can hear him explaining the thing to Watson in one of those lightning flashes of inductive reasoning of his. "It is the only explanation, my dear Watson. If the lady were merely complimenting the gardener on his rose-garden, and if her smile were merely caused by the excellent appearance of that rose-garden, there would be an answering smile on the face of the gardener. But, as you see, he looks morose and gloomy."

As a matter of fact, the gardener-that is to say, the stocky, brown-faced man in shirt sleeves and corduroy trousers who was frowning into a can of whale-oil solution-was the Earl of Marshmoreton, and there were two reasons for his gloom. He hated to be interrupted while working, and, furthermore, Lady Caroline Byng always got on his nerves, and never more so than when, as now, she speculated on the possibility of a romance between her step-son Reggie and his lordship's daughter Maud.

Only his intimates would have recognized in this curious corduroy-trousered figure the seventh Earl of Marshmoreton. The Lord Marshmoreton who made intermittent appearances in London, who lunched among bishops at the Athenaeum Club without exciting remark, was a correctly dressed gentleman whom no one would have suspected of covering his sturdy legs in anything but the finest cloth. But if you will glance at your copy of Who's Who, and turn up the "M's", you will find in the space allotted to the Earl the words "Hobby-Gardening". To which, in a burst of modest pride, his lordship has added "Awarded first prize for Hybrid Teas, Temple Flower Show, 1911". The words tell their own story.