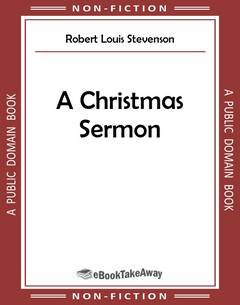 An unconscionable time a-dying—there is the picture ("I am afraid, gentlemen,") of your life and of mine. The sands run out, and the hours are "numbered and imputed," and the days go by; and when the last of these finds us, we have been a long time dying, and what else? The very length is something, if we reach that hour of separation undishonoured; and to have lived at all is doubtless (in the soldierly expression) to have served. There is a tale in Tacitus of how the veterans mutinied in the German wilderness; of how they mobbed Germanicus, clamouring to go home; and of how, seizing their general's hand, these old, war-worn exiles passed his finger along their toothless gums. Sunt lacrymæ rerum: this was the most eloquent of the songs of Simeon. And when a man has lived to a fair age, he bears his marks of service. He may have never been remarked upon the breach at the head of the army; at least he shall have lost his teeth on the camp bread.

The idealism of serious people in this age of ours is of a noble character. It never seems to them that they have served enough; they have a fine impatience of their virtues. It were perhaps more modest to be singly thankful that we are no worse. It is not only our enemies, those desperate characters—it is we ourselves who know not what we do;—thence springs the glimmering hope that perhaps we do better than we think: that to scramble through this random business with hands reasonably clean, to have played the part of a man or woman with some reasonable fulness, to have often resisted the diabolic, and at the end to be still resisting it, is for the poor human soldier to have done right well. To ask to see some fruit of our endeavour is but a transcendental way of serving for reward; and what we take to be contempt of self is only greed of hire.

And again if we require so much of ourselves, shall we not require much of others? If we do not genially judge our own deficiencies, is it not to be feared we shall be even stern to the trespasses of others? And he who (looking back upon his own life) can see no more than that he has been unconscionably long a-dying, will he not be tempted to think his neighbour unconscionably long of getting hanged? It is probable that nearly all who think of conduct at all, think of it too much; it is certain we all think too much of sin. We are not damned for doing wrong, but for not doing right; Christ would never hear of negative morality; thou shalt was ever his word, with which he superseded thou shalt not. To make our idea of morality centre on forbidden acts is to defile the imagination and to introduce into our judgments of our fellow-men a secret element of gusto. If a thing is wrong for us, we should not dwell upon the thought of it; or we shall soon dwell upon it with inverted pleasure. If we cannot drive it from our minds—one thing of two: either our creed is in the wrong and we must more indulgently remodel it; or else, if our morality be in the right, we are criminal lunatics and should place our persons in restraint. A mark of such unwholesomely divided minds is the passion for interference with others: the Fox without the Tail was of this breed, but had (if his biographer is to be trusted) a certain antique civility now out of date. A man may have a flaw, a weakness, that unfits him for the duties of life, that spoils his temper, that threatens his integrity, or that betrays him into cruelty. It has to be conquered; but it must never be suffered to engross his thoughts. The true duties lie all upon the farther side, and must be attended to with a whole mind so soon as this preliminary clearing of the decks has been effected. In order that he may be kind and honest, it may be needful he should become a total abstainer; let him become so then, and the next day let him forget the circumstance. Trying to be kind and honest will require all his thoughts; a mortified appetite is never a wise companion; in so far as he has had to mortify an appetite, he will still be the worse man; and of such an one a great deal of cheerfulness will be required in judging life, and a great deal of humility in judging others.