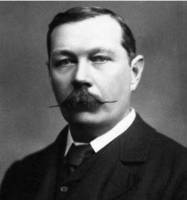 Arthur Ignatius Conan Doyle was born on 22 May 1859 in Edinburgh. His surname at birth was Doyle, though he adopted the more familiar "Conan Doyle" as his surname later in life.

Doyle's father was an alcoholic, and his early years were spent in poverty. However, wealthy uncles paid for his education, and he was educated in Feldkirch, Austria, before studying medicine at the University of Edinburgh.

Doyle worked as a ship's doctor, and in private practice in and around Portsmouth. He later studied ophthalmology in Vienna and set up practice in London.

His practice around Portsmouth was not successful, and he started writing. His first novel, a Study in Scarlet, which introduced Sherlock Holmes, was published in 1886. Doyle was given £25 for all rights to the story – a little over £2,000 in today's money. He based the character of Sherlock Holmes in part on a former university teacher, Joseph Bell, who had impressed upon Doyle the value of deduction, inference and observation.

Doyle published further Sherlock Holmes stories, and become one of the best-paid authors of his time. In 1893, to focus his attention on other works, Doyle killed off Holmes in the story The Final Problem when he and Professor Moriarty plunge to their deaths down the Reichenbach Falls. However, due to public demand, Doyle continued to write Sherlock Holmes stories, and in The Adventure of the Empty House, published in 1903, Doyle resurrected him by explaining that he had only pretended to be dead while he avoided other dangerous members of Moriarty's gang.

Doyle published many other works, including the Professor Challenger series.

As well as writing and his medical practice, Doyle played football, and was a keen cricketer, once even bowling out the famous cricketer W G Grace. He was an ardent supporter of the Boer War in South Africa. He worked as a volunteer doctor in Bloemfontein, and in 1902 was knighted by King Edward VII and made Deputy-Lieutenant of Surrey because of his support for the war.

Doyle was married twice, first to Mary Hawkins, who died in 1906 and with whom he had two children, and later to Jean Leckie, with whom he had three further children. Following the death of his first wife, one of his sons, and many close relations in the First World War, Doyle became a spiritualist and interested in the afterlife. He was very active in debates around spiritualism in the 1920s which colours his later works such as those of Professor Challenger.