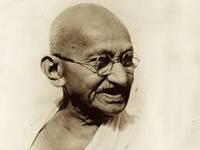 Mahatma Gandhi, also known as Mohandas Karamchand Gandhi, was a political leader and civil rights activist from India. He was born on October 2, 1869 in Porbandar, India and died on January 30, 1948 in New Delhi, India.

Gandhi was a key leader in the Indian independence movement against British colonial rule. He advocated for non-violent civil disobedience and led several successful campaigns, including the non-cooperation movement and the salt march. He also played a major role in the negotiations for Indian independence, which was achieved in 1947.

Gandhi's philosophy of non-violence and peaceful resistance inspired many other leaders, including Martin Luther King Jr. and Nelson Mandela. He is widely considered as one of the most influential figures in world history.

Gandhi was assassinated on January 30, 1948 by Nathuram Godse, a Hindu nationalist. He is remembered as a symbol of peace, non-violence and civil rights around the world.