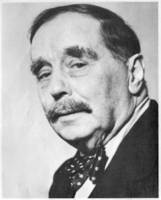 H.G. (Herbert George) Wells was born on 21 September 1866 in Bromley, Kent, England, to Joseph and Sarah Wells. Joseph Wells was a shopkeeper and professional cricketer, his mother had been a domestic servant. The family never had much money relying on a small income from a china shop and cricket bats and balls Joseph sold at cricket matches.

Herbert had an accident aged seven and was bedridden with a broken leg. To pass the time he started reading and soon became hooked. The experience also kindled his desire to write. Later that year he entered private school at Thomas Morley's Commercial Academy. The teaching was unorthodox, Wells said later that the school concentrated on copperplate handwriting and simple arithmetic. Wells continued at Morley's Academy until 1880.

In 1877 his father fractured his thigh playing cricket and his professional career was over. Income from the shop was too small to keep Herbert at home and he was sent away to become an apprentice draper. His experiences were not happy and he later used these as inspiration for his novels The Wheels of Chance and Kipps.

Wells's father and mother had always had a difficult relationship and when his mother took a position as a lady's maid at a house in Sussex, they separated (but never divorced).

In 1883, Wells became an assistant teacher at Midhurst Grammar School, in West Sussex, until he won a scholarship to the Normal School of Science (later the Royal College of Science, now part of Imperial College London) in London, studying biology under T. H. Huxley. As an alumnus, he later helped to set up the Royal College of Science Association, of which he became the first president in 1909. Wells studied in his new school until 1887 with an allowance of twenty-one shillings a week thanks to his scholarship.

He soon entered the Debating Society of the school. Wells became interested in social reform and became interested in the newly formed Fabian society. Wells left the School of Science in 1887 without a degree and went to live with his Aunt Mary teaching at his uncle's school. He became involved with his cousin Isabel Mary Wells and married in 1891. The marriage did not last and he left her in 1894 for one of his students, Amy Catherine Robbins. They married in 1895 and had two children, George Philip Wells in 1901 and Frank Richard Wells in 1903.

1895 was a watershed year for Wells when he had several of his stories published. In 1897 he published The Invisible Man and his writing career took off.

Throughout his life Wells was interested in politics and even stood for election as a member of parliment in 1922 and 1923. Wells was a staunch advocate of a totalitarian view of socialism. Wells wanted a World State controlling a planned economy. Wells did not believe in democracy and considered that only intellectuals (scientists, engineers and other worthies) should be allowed the vote. Ordinary citizens could never be educated enough to decide major issues. Wells took a close interest in the development of Lenist Russia as he believed this was in line with his own ideas. Although considered a free-thinker and a radical at the time, Wells had little real impact on contemporary politics and is best remembered for his contribution to science fiction.