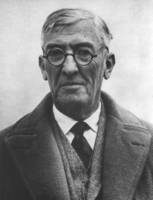 George Ade, one of seven children, was born in Kentland, Indiana. Ade met his lifelong friend cartoonist John T. McCutcheon while attending Purdue University and in 1890, Ade was hired on by the Chicago Morning News (later known as the Chicago Record), where McCutcheon was already working.

Ade wrote a popular column, Stories of the Streets and of the Town. Illustrated by McCutcheon, Ade's stories described Chicago-life. His characters included Artie, an office boy, Doc Horne, a gentlemanly liar, and Pink Marsh, a black shoeshine boy. Ade's well-known "Fables in Slang" was introduced in this column. The 1890s were an important era in American history and Ade's literary reputation as a humorist was built on his ability to create authentic American characters. Ade's fiction dealt consistently with the "little man," the common, undistinguished, average American, usually a farmer or lower middle class citizen.

As a moralist who is also well aware of the ironies of the modern world, George Ade was perhaps our first modern American humorist, paving the way for people such as Will Rogers to follow. The United States, in Ade's lifetime, underwent a great population shift and transfer from an agricultural to an industrial economy. Many felt the nation suffered the even more agonizing process of shifting values toward philistinism, greed, and dishonesty. Ade's prevalent practice is to record the pragmatic efforts of the little man to get along in such a world.

After twelve years in Chicago, he built a home near the town of Brook, Indiana (Newton County). It soon became known for hosting a campaign stop in 1908 by William Howard Taft, a rally for Theodore Roosevelt's Bull Moose Party in 1912, and a homecoming for returning soldiers and sailors in 1919.

George Ade was one of the American writers whose publications made him rich. When land values were inflated about the time of World War I, Ade was a millionaire. The Ross-Ade football stadium at Purdue University was built with his (and David E. Ross's) financial support. He also generously supported his college fraternity, Sigma Chi, leading a fund-raising campaign to endow the Sigma Chi mother house at the site of the fraternity's original establishment at Miami University. Ade is also famous among Sigma Chis as the author of The Sigma Chi Creed, written in 1929, one of the central documents of the fraternity's philosophies.

While Ade's writings fell out of public favor as America struggled through the Great Depression and the onslaught of World War II, his legacy lived on. Ade populated his writings with comedic characters lifted from the streets and front porches of small Midwestern towns and peppered the language with witty slang; characters and situations that can still be found in movies and television sitcoms. Ade's comedic style is just as popular today as it was when he introduced it over a hundred years ago. While Ade was never considered a high-brow literary writer or a fashionably caustic social critic, he succeeded in what he had set out to do, he made America laugh.