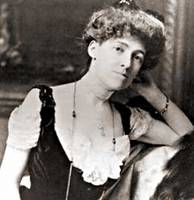 Edith Wharton was born Edith Newbold Jones on 24 January 1862 in New York City. She was born into a very privileged and wealthy family, from which we get the phrase "Keeping up with the Joneses". When she was young, her family avoided the civil war by travelling widely in Europe, and Wharton maintained a love of travel and a strong association with Europe throughout her life.

In 1878, at age 16, Wharton had her first poems published. She did not publish books until after her marriage to Edward (Teddy) Wharton in 1885. Her first book, The Decoration of Houses, a manual on interior design which she wrote with the architect Ogden Codman, was published in 1897.

Edward Wharton suffered from severe depression, and he and Edith divorced in 1913.

Wharton published novels, short stories, travel books and design books. Many of her stories gave an insider's view of America's privileged classes, and showed her natural wit and insight. The Age of Innocence won the 1921 Pulitzer Prize for Fiction, making Wharton the first woman to win this prize.

Wharton moved to France in 1911, and throughout the First World War worked tirelessly to help many groups of displaced people, for which she was named as a Chevalier of the Legion of Honour.

Wharton remained in France after the war, dividing her time between Paris and her villa in Provence.

Wharton died in France on 11 August 1937, and is buried in the American Cemetery in Versailles.